In one of the most vivid memories of my childhood days I remember standing on the balcony of the topmost floor of my house and looking beyond the splendor of the nearby Shankracharya hill at the battlements of a distant fort rising above the horizon as if in some fairytale.

A schoolboy's dramatic imagination would then conjure up visions of invading armies, desperate defenders and glorious battles being fought at its walls.

On rare trips to downtown Srinagar in those years, mostly to pay homage at the holy shrines of Makhdoom Sahib and Dastgeer Sahib, the full grandeur of the Hari Parbat fort would come into view, no less impressive in reality as in the imagination.

Even today all roads seem to lead straight to the majestic fort on the hill, which totally dominates the skyline in the old city. Like the Amar Mahal Palace at Jammu the fort presents travelers with an instantly recognizable architectural symbol of Srinagar city.

After all these years whimsical flights of fancy have been replaced by cold reasoning by the rigors of medical training but I am still reminded of those childhood memories. I therefore followed with great interest the discussion in the columns of a local newspaper about who actually built the fort.

In his book titled 'Travels in Kashmir, Ladak, Iskardo', G.T. Vigne – who travelled through Kashmir in 1838 records that Akbar the Great made the fort on the Hari Parbat hill his residence and built a strong wall round the foot of the hill. He also reports an inscription in Persian over one of the five gates of the wall translated by him as:

'The chief of kings of the world, Shah Akber, may his dominions extend'.

He also reports another inscription stating that:

'this killah of Nag-i-Nagur is built by the order of the great king, Akber, at the expense of one crore and ten lakhs of rupees from Hindustan, that two hundred master builders were employed and that no injustice was done to anyone who assisted them, but that all were paid – that there never was a king like this king of kings, nor ever will be – that it was built in the year of the Hejira, 1006 (A.D 1597) and that the Superintendent's name was Khoja Mohamed Husyn, a slave of Akber's'.

This inscription still exists at Kathi Darwaza. Many other sources also refer to Akbar as the builder of the fort on the Hari Parbat or Koh-i-Maran.

An earlier structure dating from Mughal times was probably further developed into the present fort during the Afghan period – hence the later inscription reported by Prof. Ghulam Mohiuddin Shah in his letter (GK Reflections: 08.12.2004).

Whoever built the fort, what is more important is that it is part of our cultural and architectural heritage and needs to be preserved for future generations. The learned professor and Naseer A Ganai deserve credit for bringing this issue back into public memory.

Visitors have not been allowed access to the Hari Parbat fort since 1989 but the official Tourism department description of the fort reassures us that though there is little left of the fort's former glory, the ramparts are still impressive and the old apartments within the fort, even though in a state of ruin, still convey at least a little of the grandeur of the Mughals summer retreat in paradise. I am reminded of Pearce Gervis' exhortation:

'It (the Hari Parbat fort) should never be allowed to fall into decay, to crumble and sink within the hill from which it was built, for only by such a reminder – one which all in the city and not the few who live nearby may see at all times – can people not forget the past and on that build their future'.

The restoration of an entire fort would appear to be an enormous and unprofitable enterprise but it has been done before – with impressive results. At the forefront of similar restoration effects in India are the architectural conservationist-restorer duo of Aman Nath and Francis Wacziarg who revive old forts and havelis based on what they call 'the rule of minimum intervention'.

Their flagship project was the restoration of the Neemrana Fort-Palace, Rajasthan which earned a prestigious UNESCO Asia-Pacific Heritage Award nomination in 2001 for 'Reconstruction, conservation and adaptive reuse of palace ruins, dating from 1464, to self-sustaining heritage tourism property while encouraging local economic development'.

The UNESCO Asia-Pacific Heritage Award of Excellence for 2004 was awarded to the restoration of the Baltit Fort located at Karimabad in Pakistan's Hunza Valley. To quote the award organisers:

'The restoration of the majestic 700-year-old Baltit Fort exemplifies excellence in conservation practice applied to large-scale monuments. This challenging project was the first of its kind in northern Hunza.

The historic wood and masonry structure was carefully repaired using a combination of traditional local knowledge and state-of-the-art conservation techniques.

In its new use as a cultural centre and museum, the Baltit Fort attracts thousands of visitors to the province and has contributed to reinvigorating the local community's pride in their heritage. The fort's restoration has fostered the local revival of traditional building trades, while an associated handicrafts project provides improved livelihood opportunities in the area.' 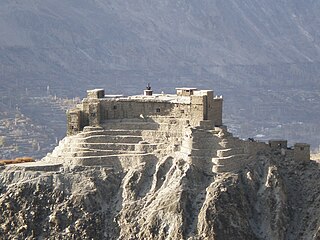 The success of the Baltit Fort project in the remote Hunza Valley in Pakistan can easily be replicated in Kashmir provided we have the desire to do it – and the will to fulfill that desire. The focus should be on immaculate restoration of the Hari Parbat fort while simultaneously developing it as a must-see tourist attraction and also a thrust area for handicrafts, possibly in the shape of an affiliated craftsman's village which is a concept quite popular with tourists. The employment opportunities generated by the project would be the icing on the cake.

Like everything else that Kashmir's slow rot has consumed, will our children have to open their history books for a glimpse of the Hari Parbat fort, the Dal Lake, or the Hangul? The time to act is now.